Any promotion that includes a combination of two famous brand names such as Chips Ahoy! and Dollar General along with two of the most popular promotional formats such as a Sweepstakes and an Instant Win Game is just asking to be noticed.  With that being said,  there is sure to be plenty of spectators (and even more active participants) involved in the newly released Dollar General Chips Ahoy! Xbox Promotion.  The promotion will be awarding prizes from three different tiers (Grand Prizes for the Sweepstakes and First and Second Prizes for the Instant Win Game) and can be registered for by navigating to www.ChipsAhoyDGsweeps.com and completing the easy (not to mention straight-forward) online entry form.

Wait, what else can you tell me about I before I run off and go enter?

Those who decide to get in on the action should make sure to circle the date of August 23rd, 2018 on the calendar the Grand Prize winners will be drawn around this time (as always GOOD LUCK!!).  Participants who are lucky enough to bring home one of the available prizes should be prepared to wait about 8-10 weeks from the end of the promotion for fulfillment.  Common questions about the promotion can likely be answered by reviewing the information found under the FAQs at www.ChipsAhoyDGsweeps.com. 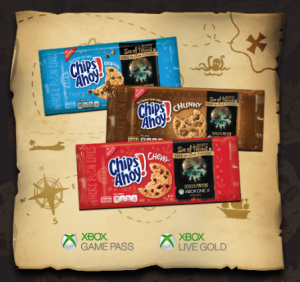 The relatively low overall value of the prizes being offered keeps this one far away from the elusive 4 Slice Freshness Rating.  However, the saving grace of this promotion is its uncanny ability combine promotional formats and great brand names (just barely keeping it out of 2 Slice territory).

View all posts by SweepstakesAdmin